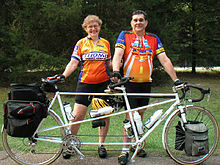 A large tandem, or more specifically, a quint (for 5 people)

The tandem bicycle or twin is a form of bicycle (occasionally, a tricycle) designed to be ridden by more than one person. The term tandem refers to the seating arrangement (fore to aft, not side by side), not the number of riders. A bike with two riders side by side is called a sociable.

To Test Ride Your New Bike!

Now specializing in appointment only sales of tandem, recumbent, and Bike Friday bicycles.